John has been doing a great job blogging about the interesting varieties of insider trading cases that the SEC has brought in recent years (see this one as an example). It’s amazing to me that folks engaging in insider trading don’t realize how easy it is for the SEC Staff to follow an electronic breadcrumb trail.

Even more amazing is when a former member of the SEC Enforcement Staff is oblivious about how easy it is to follow an electronic trail. Here’s an excerpt from this “FT” story about a former SEC Staffer obstructing justice and ignoring his own electronic footprint (also see this blog for the DOJ complaint):

A former employee of the Securities and Exchange Commission was charged on Wednesday for allegedly leaking information about an investigation into a private equity group that he subsequently joined.Michael Cohn, who was a securities compliance examiner in the SEC’s enforcement division, was accused by federal prosecutors in Manhattan of giving investigative information to senior management at GPB Capital Holdings.

Mr Cohn left the SEC in October 2018 to take a job as chief compliance officer at the company, where he earned $400,000 a year, prosecutors said.“[T]he defendant abused the trust placed in him as an SEC employee, obstructing an active investigation,” said Richard Donoghue, the US attorney for the eastern district of New York. Mr Cohn is charged with obstruction of justice, unauthorised computer access and unauthorised disclosure of confidential information. He was arraigned on Wednesday morning and released on a $250,000 bond.“Mr Cohn is innocent of these charges and looks forward to vindicating himself at trial,” said Scott Resnik, his attorney.

The case is the second in the past two years involving allegations of staffers at the SEC and related institutions leaking information to companies as they sought jobs in the private sector. Last year, former employees of the Public Company Accounting Oversight Board, which is overseen by the SEC, were indicted for leaking information about inspections of audits at KPMG, where they had sought or taken jobs. KPMG agreed to pay $50m to settle the matter with the SEC earlier this year.

Mr Cohn had worked in the asset management unit of the SEC’s enforcement division, which he joined in 2014 from the private sector, according to a January announcement of his hiring by GPB. David Gentile, GPB’s founder, said at the time that Mr Cohn’s “deep knowledge and experience will be valuable to us”. GPB and an outside representative for the group did not immediately respond to requests for comment. A receptionist reached by phone said they would pass on the FT’s request for comment to others in the group.

In March, Investment News reported that the company had acknowledged an unscheduled FBI visit to its offices the prior month. Prosecutors accused Mr Cohn of accessing “numerous SEC databases” in September 2018 to steal information about the commission’s investigation into GPB. At the time, he was interviewing with the company for a position and had told individuals at GBP he had “inside information”, prosecutors alleged. He left the SEC on October 12 last year and accepted a job with CPB four days later, according to the government.

“When Cohn left the SEC to join GPB, he left with more than his own career ambitions,” said William Sweeney, assistant director-in-charge of the FBI’s New York field office, in a statement on Wednesday. “The proprietary information he allegedly retrieved — from databases he wasn’t authorised to access — included compromising information about a GPB investigation and sensitive details related to the same,” Mr Sweeney added.

Deal Cubes: “Lunch Atop a Skyscraper”!

Every once in a while, I still add deal cubes to my extensive “Deal Cube Museum” (found under the “Photos” tab on our home page). I just love this new one from Jessica Pearlman and Naomi Ogan of Fortive. The deal cube is a three-dimension depiction of the famous “Lunch Atop a Skyscraper.” Corbis Images owns the negative to this famous photo and it sold assets to Unity Glory International – hence, the deal cube in this image…keep sending in those deal cubes! 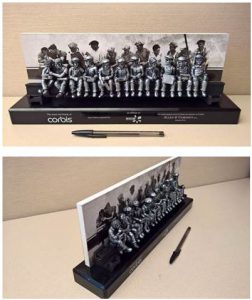 The Beauty of This Job

When I left the board of the MidAtlantic Chapter of the Society of Corporate Secretaries a few years ago (after 15 years of service), I received this wonderful handwritten card (as well as a gift certificate). For a guy that works from home, I haven’t seen a handwritten note for years! I was touched. 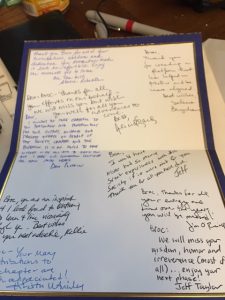