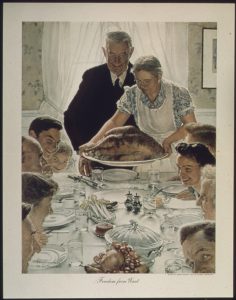 Happy Thanksgiving! I hope everybody gets a break from work, avoids travel nightmares & gets a chance to spend some time with family and friends over the holiday.  Now, I’m going to speak bluntly – when it comes to cooking your turkey, I think most of you are doing it wrong.  See that Norman Rockwell bird to the left? Chances are, you’re preparing yours the same way Mr. & Mrs. “Freedom from Want” did in 1942, and like theirs, I’d wager yours looks great, but tastes pretty mediocre.

I do most of the cooking in our house, which my wife thinks is only fair considering that I do most of the eating.  I’ve been cooking Thanksgiving dinners for decades, and for most of that time, my turkey was a crapshoot. Usually, it turned out okay, but sometimes, it ended up so dry that you needed to drown it in about half a gallon of gravy in order to choke it down.

I read all sorts of tips about how to cook the turkey, and finally got so befuddled that I ended up with a bird in the oven that looked like it was wearing a tin foil hat to protect against gubmint mind control rays and that had so many meat thermometers sticking out of various parts that it looked like it was on life support in a poultry ICU. Meanwhile, I was spending Thanksgiving Day hanging around the kitchen adjusting the oven temp & basting the thing every 15 minutes for 3+ hours, while everybody else was drinking Christmas Ale & watching football.

This was sub-optimal & I kept thinking that there had to be a better way. A few years ago, I finally stumbled upon it. No, it’s not the deep fried thing.  I’ve had deep fried turkey, and it tastes like chicken wings.  I like chicken wings, but not for Thanksgiving.  Also, I’m not comfortable with what seems to be about a 1-in-4 chance of having flames engulf everything I own that goes along with deep frying a turkey.

Anyway, here’s the big reveal –  if you spatchcock your turkey, you will achieve true Thanksgiving bliss. What’s “spatchcocking” a turkey all about?  It’s simple really, you butterfly the bird by cutting out the backbone with poultry shears, and then flip it over and press down on it until the wishbone breaks.  Then season it & toss it breast side up into a preheated oven – or do as I do, and throw it onto your grill – and prepare to be amazed.

The first thing you’re going to notice about this method is how fast it is. I cooked an 18 lb. turkey on my “Big Green Egg” grill last year & it took just about 80 minutes at 400 degrees. For those of you for whom my description of spending an afternoon with a baster in hand struck a cord, that may sound absurd – but no kidding, it really is that fast.

The other thing is that the bird turns out really juicy with nice, crispy skin.  Because it’s flattened out, it cooks more evenly and you don’t end up drying out the white meat in order to avoid poisoning the folks who like dark meat.  The backbone also will help you make a richer stock for your gravy, if you’re so inclined.

So, if you want to simplify cooking Thanksgiving dinner & end up with a much better result, give this method a try.  Here’s the recipe from the “Serious Eats” website that I use (although I find a 400 degree temperature works better on my grill). Finally, regardless of how you how you cook your bird (or your Tofurky), have a great holiday!