Here’s one of the best pieces I’ve seen written about gender diversity on boards – and it’s written by an institutional investor! Board diversity is one of those topics that I find hard to blog about because its depressing. The data shows that there has been little progress over the past decade – for both gender & racial diversity. Bear in mind that it’s been a decade since this has been targeted as a major governance issue. Everyone seems to agree it’s a big problem – yet things don’t really don’t seem to be changing. At least in the US.

For gender diversity, one of the reasons why boards aren’t being diversified fast enough is the gap in perception between male & female directors regarding the magnitude of this problem. Another is the myth that there aren’t enough women at the top of the ladder who can serve as candidates. Meanwhile, boards that aren’t diversified are failing to reap the benefits that diversity produces.

Now I don’t believe that disclosure about diversity is going to fix the problem – but I do think that a regulatory push might be necessary because it seems quite clear that boards don’t seem willing to fix this problem on their own. Many countries in Europe have found success by requiring a minimum level of female directors on boards (30%). It might be time for such a drastic solution…

Here are 9 other board diversity notable items:

1. In this blog, Bob Lamm waxes more on the topic – and so does Doug Chia in this blog.

2. Here’s Equilar’s new “Gender Diversity Index” – which is a chart that tracks the progress of women on Russell 3000 boards – currently at 15.1% as of 12/31/16. Based on an analysis of the growth rate over the past 4 years, the study projects that parity wouldn’t be reached until 2055.

3. The UK has agreed to create a framework for gender pay gap reporting by employers with over 250 employees.

4. Don’t forget we have posted the transcript for our recent webcast: “Board Refreshment & Recruitment” – which tackled board diversity disclosure & more.

5. Check out this “TED Talk” by Vernā Myers on “Interrupting Bias in Ourselves.”

7. This recent study by Board Governance Research/IRRCi shows there is scant age diversity on S&P 500 boards.

8. In celebration of “International Women’s Day” recently, 40 stock exchanges hosted a bell ringing ceremony to raise awareness of the pivotal role the private sector can play in advancing gender equality to achieve the UN’s SDG 5.

9. The state of Pennsylvania recently passed a resolution to “encourage” companies incorporated there to promote gender board diversity. Not worth much because it’s aspirational…

This 1775 painting from Thomas Beach – entitled “The Hand That Was Not Called” – seems to capture today’s “diverse” board: 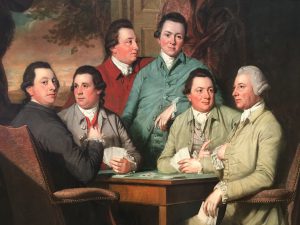