In my self-anointed role as “keeper of the weird” for some of the notables related to the SEC, it’s high time that I share this story. When the SEC announced – fifteen years ago – that it was moving its headquarters from 450 Fifth Street to 100 F Street, I got sentimental & started to inquire about what would happen to the massive letters that comprised the main signage above the entrance of the old HQ. Somehow I reached a facilities person that was the guy for this purpose.

I sent him an email asking whether I could obtain the letters when they were taken down. As you can see from this picture, there were 43 letters bolted into the wall – I was gonna distribute a letter to each of my friends that had worked at the agency with me: 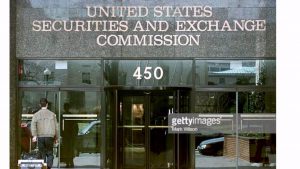 I was surprised when I soon heard back that I would indeed be receiving the letters when they came down. Joy! A few months later, I knew the SEC’s move was complete & the letters had come down. I emailed my guy. Nothing. Tried again a few weeks later. Radio silence. One last try. Nada. I gave up.

A few months later, I emailed the guy because I was feeling sadistic. Amazingly, the guy immediately responded that if I came down right away, he would be happy to share. I was on the way! When I got there, I didn’t receive all 43 letters – but I did receive this nice collection: 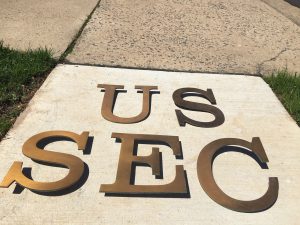 So I got that going for me. Since the letters were attached to marble tile, the mounting bolts are four inches long. As Warren Buffett once responded to me when I asked him to speak at our executive pay conference, “If you don’t ask, you don’t receive. And sometimes even if you ask, you still won’t receive.” In this case, I did indeed receive…

Here’s the intro from this “Directors & Boards” article:

Warren Buffett, the chairman and CEO of Berkshire Hathaway Inc. who’s known as the Oracle of Omaha, slammed independent directors for being too focused on their paychecks, and not on keeping the CEO in check. “You don’t get invited to be on boards if you belch too often at the dinner table,” Buffett said at the company’s annual meeting in Omaha, Neb.

“I’ve been on 20 public company boards; I’ve seen a lot of corporate boards operate. The independent directors, in many cases, are the least independent,” he explained. If directors get about $250,000 a year, and that’s an important part of their income, he added, “they’re not going to upset the apple cart.” The incentive for those directors, he continued, is to go along with the CEO. That way, if the CEO of another company calls about that director, he or she will be described as having never raised any problems. “How independent is that?”