In 2016, individuals in more than 67 countries outside the United States accounted for more than 460 tips under the SEC’s whistleblower program – that’s 10% of the total, and the number is growing. This Dechert memo suggests that the number of tips from abroad will continue to increase, and offers some thoughts on best practices for multinational corporations’ compliance programs.  This excerpt says that an appropriately designed program should include, at a minimum:

– Convenient and confidential channels for employees to report concerns and complaints;
– Proper recordkeeping and tracking of complaints from initial report to resolution;
– Pre-existing protocols setting forth how to properly engage whistleblowers, investigate allegations of misconduct and when to retain external counsel;
– Well-trained staff empowered to independently identify misconduct and thoroughly investigate complaints, possibly in conjunction with external counsel;
– Proper documentation of the results of investigations, including any remedial measures adopted in response; and
– Well-designed internal controls to reduce the incidence of complaints and reduce the likelihood of retaliation against complaining employees.

Even with a properly implemented program, a company may not be able to completely avoid whistleblower complaints. But companies with established policies and procedures for appropriately  handling whistleblower complaints will be in the best position to defend themselves against government investigations, & their efforts will likely be favorably viewed by the authorities.

The SFO and US regulatory authorities, including the US Department of Justice and the US Securities and Exchange Commission, have also stated that they are committed to cooperating on cross-border investigations. As part of that cooperation, the UK and US agencies announced in early December 2016 that the DOJ will be assigning one of its attorneys to work in London, the first year with the Financial Conduct Authority (FCA) and the second with the SFO. US Assistant Attorney General Leslie Caldwell stated that this position “builds on years of parallel investigations and significant cooperation” and that the FCA and SFO are “highly interested in reciprocating” with a position assigned from the UK to the US.

Since we’ve got kind of an international focus today, I thought it was a good time to point out that John Travolta’s character in Pulp Fiction was right –  they do call it a “Royal with Cheese” in France (or a “Royal Deluxe” if you get yours with lettuce & tomato). Note also the mayo with the fries. I’ll never doubt a character in a Tarantino movie again: 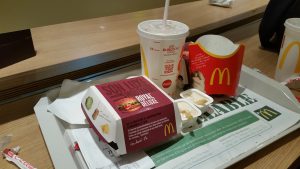 By the way, if you’re concerned about the potential decline & fall of Western Civilization, here’s something you probably don’t want to know — this McDonald’s is at the Louvre.