As noted in the intro of this Cooley blog:

The D.C. Circuit issued a per curiam order denying the petitions of the SEC and Amnesty International for a rehearing en banc in Natl Assoc. of Manufacturers v. SEC, the conflict minerals case. No member of the court even requested a vote. The order leaves standing the decision of the three-judge panel, decided in August of this year (see this PubCo post). In that case, the panel, by a vote of two-to-one, reaffirmed its earlier decision, concluding that the requirement in the conflict minerals rule to disclose whether companies’ products were “not found to be DRC conflict free” amounted to “compelled speech” in violation of companies’ First Amendment rights.

Will the SEC file a petition for cert? Given that the panel viewed the more lenient standard of review for compelled commercial speech under the First Amendment (announced in Zauderer v. Office of Disciplinary Counsel) to be applicable only to disclosures in connection with voluntary advertising or product labeling — a position the SEC asserted in it brief “was unprecedented” — it would seem surprising for the SEC to let the panel decision remain without a further challenge.

Also see this Cooley blog entitled “Is a lot more at stake in the conflict minerals case than the conflict minerals disclosure rules?” – and this Elm Sustainability alert. It’s unclear whether Corp Fin now needs to act – they have been saying that the April 2014 statement by Keith Higgins continues to be operative. But maybe now that will change…

A few years ago, it looked like the SEC’s Enforcement Division was on the verge of bringing at least one climate change disclosure cases as a number of companies responded to informal inquiries. But nothing has resulted from those investigations so far. As noted in this blog by Kevin LaCroix, perhaps a state attorney general will be the first to bring an action in the end. Here’s an excerpt from the blog:

However, in the past week, the service of a subpoena on Exxon Mobil Corp. by New York Attorney General Eric T. Schneiderman has raised the possibility that an enforcement action against the energy giant relating to its climate change-related disclosures may be in the works. The Attorney General’s action also raises the question whether other companies and industries could also be targeted. These possibilities highlight possible corporate climate change-related enforcement and liability exposures.

In a November 5, 2015 press release, Exxon acknowledged that it had received a subpoena from the New York Attorney General “for production of documents relating to climate change.” The service of the subpoena follows a series of articles in the Los Angeles Times about the company’s climate change-related disclosures. The articles, and similar articles that appeared on the Inside Climate News website, suggest that Exxon knew of the climate change risks from fossil fuel use from its own research since the 1970s, yet extensively funded politicians and campaigns that expressed doubt over climate change science.

Don’t forget to tune in today for the webcast – “How to Draft Meaningful Sustainability Reports” – to hear Lou Coppola of the Governance & Accountability Institute, Kate Kelly of Bristol-Myers Squibb and Pam Styles of Next Level Investor Relations explain the keys to drafting sustainability reports that are meaningful to investors & other constituents and a “how to” list of things you should be aware of when drafting.

A while back, I urged anyone that spotted the roving billboard that is lobbying against the SEC to take a picture. Someone forwarded this article that includes this pic: 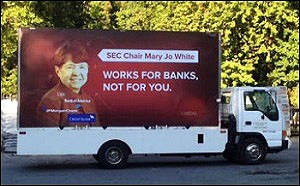