Wrapping up a project that I feverishly commenced two years ago, we are happy to say the inaugural 2015 Edition of Romanek’s “The In-House Essentials Treatise” is done being printed. Here’s the 79 pages of our “Detailed Table of Contents” listing the topics so you can get a sense of the Treatise’s practical nature. You will want to order now so you can receive it as soon as possible.

With over 1400 pages, this tome is the definition of being practical. You can return it any time within the first year and get a full refund if you don’t find it of value.

A few weeks ago, the DOJ made good on a promise made last fall to give credit to companies that improve their compliance programs when a Barclays plea deal included a provision along those lines. Here’s an excerpt from this memo:

For the first time, the antitrust division of the U.S. Department of Justice (DOJ) has awarded a company sentencing credit for implementing an effective compliance program after the start of an investigation. Getting credit for compliance efforts should not be as hard as space travel, but up until last week, a company’s chances for getting any credit (short of being the winner-takes-all leniency applicant) were no better than landing on the moon. Barclays PLC, along with four other investment banks, entered into a plea agreement with the DOJ on May 20, 2015, for its participation in the alleged FOREX cartel conspiracy to manipulate the price of U.S. dollars and euros exchanged in the foreign currency exchange (FX) spot market.

The sentencing credit is apparent from a single line in the plea agreement: “The parties further agree that Recommended Sentence is sufficient, but not greater than necessary to comply with the purposes set forth in 18 U.S.C. §§ 3553(a), 3572(a), in considering, among other factors, the substantial improvements to the defendant’s compliance and remediation program to prevent recurrence of the charged offense.”1 The four other major banks that entered into plea deals did not have this same provision, and it appears that they did not receive credit for their compliance programs.

In this 68-page guide, BlackRock & Ceres have teamed up to provide guidance for institutional investors on how to engage on sustainability issues. The guide includes tactics & case studies as 30 institutional investors describe their priorities and strategies they use to engage with companies across different asset classes, both internationally and domestically, on ESG matters. Here’s more from this Davis Polk blog…

Meanwhile, as reported in the Society of Corporate Secretaries’ Alert, based on data from Proxy Insight (see pages 8-9), CalSTRS is one of the least likely of the public pension funds to support the election or re-election of directors – supporting management nominees just 36.7% of the time. CalSTRS is also almost twice as aggressive as the next pension fund on the list identified as least likely to vote for management’s slate – the Illinois State Board of Investment – coming in at 67.4% support.

I’ll be blogging more about yesterday’s magical event in the near future. But I can’t resist posting this pic of the two men shepperding the event – my newly graduated high school son & me: 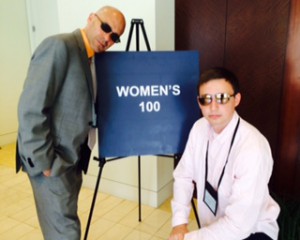