Recently, the SEC’s Division of Enforcement Staff issued this 4-page guidance. This issue continues to generate controversy, with the SEC being criticized for its increased use of administrative proceedings. For example, the WSJ recently penned this article claiming the SEC won against 90% of defendants before its own judges in contested cases from October 2010 through March of this year – compared to a 69% success rate in federal court. See also this DealBook piece and Corporate Crime Reporter article.

As noted in these memos posted in our “SEC Enforcement” Practice Area, the new guidance identifies a non-exhaustive list of four factors that the SEC may consider in determining the proper forum for an enforcement action – with the guidance noting that the Enforcement will continue to prefer administrative hearings as the venue for resolving novel or complex issues.

For all the latest stats on proxy access shareholder proposals, see what I just posted on our “Proxy Season Blog”…

This WSJ article has a catchy title of “SEC Receives At Least One Audit Independence Query Daily” to demonstrate how busy the SEC’s Office of Chief Accountant is when it comes to auditor independence. Here’s an excerpt from the article:

Auditor independence is a hot-button issue for the Securities and Exchange Commission’s enforcement unit. “Independence is an issue that we are very focused on, and will continue to stay focused on,” Michael Maloney, chief accountant at the SEC’s Division of Enforcement said at a Baruch College conference in New York last week.

Outside of enforcement, the SEC gets about 400 auditor-independence questions a year, or about one a day, says the agency’s chief accountant, James Schnurr. Last year, the SEC settled two cases against auditors over alleged violations. Ernst & Young LLP paid more than $4 million to settle allegations that it lobbied on behalf of audit clients. KPMG LLP paid $8.2 million to settle allegations that it provided prohibited extra services to audit clients. In their settlements, the firms neither admitted or denied the allegations.

Randi Morrison is in town for the Society’s annual meeting with the Corp Fin Staff and we had a little sight-seeing fun last night: 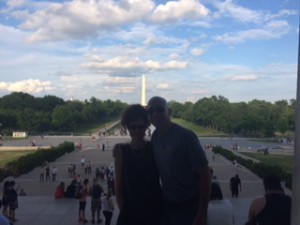